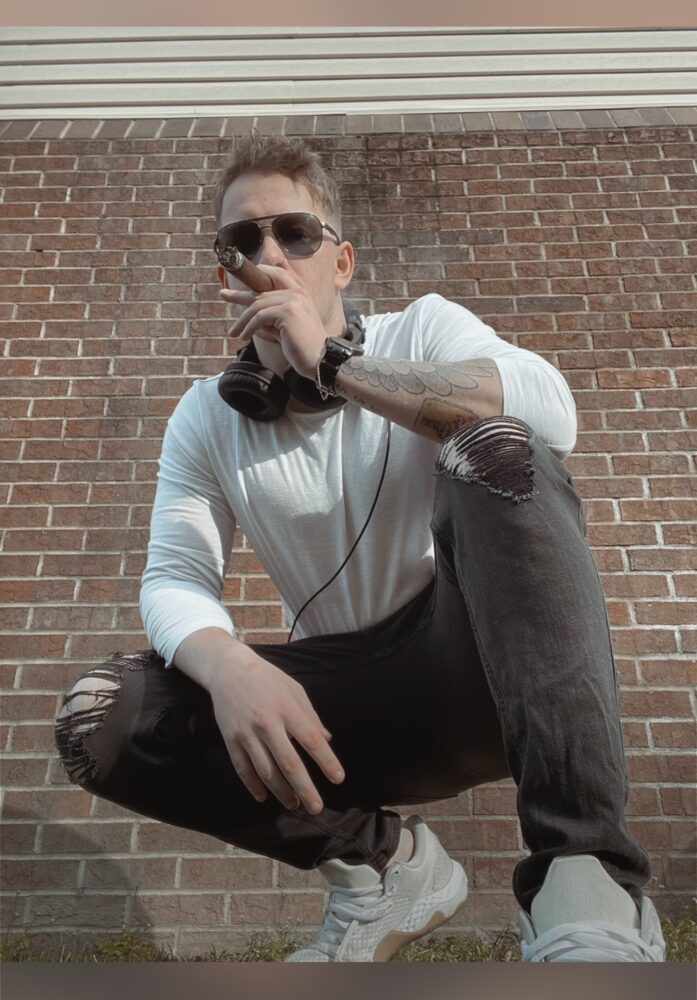 I’ve always loved music from an early age. I would stand in my living room as a 4-year-old and sing and dance to *NSYNC music videos and pretend like I was the star of a show in a filled-out arena. Eventually, I came to the realization that I actually cannot sing or perform like 4 year old me thought I could.

In college, I rushed Sigma Chi and the first person I spoke with was a DJ when I eventually signed my bid and took me in as his “big brother” we would be in his dorm and he put me behind his board and let me find my way. I did it recreationally for a couple of years until I moved into a house with two other DJs my junior year, and I started following and watching them and gave me some tips and tricks until I was able to start DJing on my own at our local bar.

I would play in front of nobody some nights during college breaks, but I kept getting better and working on my craft. COVID hit and I was sitting alone in my house with just my dog practicing from 10 AM until dark getting better. When restrictions began to get lifted I got the chance to get up in front of an actual crowd and perform, and the buzz and electric feeling I got after my first show was when I thought to myself “I may be able to take him as far as I want to.”

Ever since then I have been filling up my schedule DJing and doing what I love. Now I DJ roughly 5/6 days out of the week and it’s been the best feeling realizing I can do what I’m passionate about as a full-time job.

The many DJs I’ve come to know and love that I’ve had the privilege to work with. I would say I am very technical yet creative with my style of play.

Too often I’ve noticed DJ’s not taking risks with their music selection or too afraid to do something crazy behind the board. Thankfully I have had the opportunity to stand behind a lot of DJs around my area and pick up on things that work for them and things that don’t work out.

You also get to a point where you think to yourself “People trust me enough to get behind a computer and play in front of a group of people, why not push my boundaries a little bit?” That’s why I always go into a gig with an “entertainer” mindset.

Kentucky is not the most diverse place in the world for music. We’re most well known for our country.

Recently artists like Bryson Tiller, Jack Harlow, and EST Gee have been pushing the hip-hop scene in Kentucky to new heights and finally putting Kentucky on the map for our rap and hip-hop artists coming up. There’s nobody really like that for EDM around here.

Some bars and clubs try and specialize in EDM, but name someone from the EDM scene to come out of Kentucky? Nobody to mind.

While I mainly DJ country, alternative, and rap, EDM has been one of my favorite genres to listen to, so I decided to dive into the EDM scene and start producing. My first single is set to be released on all streaming platforms on May 20th and is one of those songs where you can play it anywhere and just vibe to it.

Technically, beatmatching. Whenever I first started to DJ I would watch YouTube tutorials, read articles and blogs, and even joined Facebook groups for DJs.

The one thing I got from that is that some people struggle with beatmatching, especially by ear. I knew that I wanted to excel in that technical skill if I knew people often struggle with it.

It became more important when I started DJing in alternative and country bars. Where guitars, drums, and other instruments are played by real people in a band and not made in a DAW, the BPMs don’t always match and they can fluctuate faster or slower depending on the performer.

Man-made music can be difficult to mix. Focusing on beatmatching early on and implementing good music selection has helped me tremendously open up my range of music to perform at shows.

I’ve had the luxury of meeting so many great DJs that have helped me along the way of my DJing journey. Kallik has a special place in my life because he was the first person to get me started with DJing.

DJ RedLoh & DJ Louie C were the first few to help me with my technical abilities and spent time with me in the basement of Wellington just playing. From there I began watching the likes of DJ Sayre, DJ Rane, DJ LeXo, and others and picking up their skills and techniques.

I also have to give a huge shoutout to DJ Highmax, who alongside RedLoh, has had the most faith in me and my abilities and has given me the best opportunities to succeed and grow as an entertainer. Without them, I wouldn’t be where I am today.

To find more from Alex Bailey you can visit his Instagram, Soundcloud, and be sure to lookout for any upcoming performances on this website!