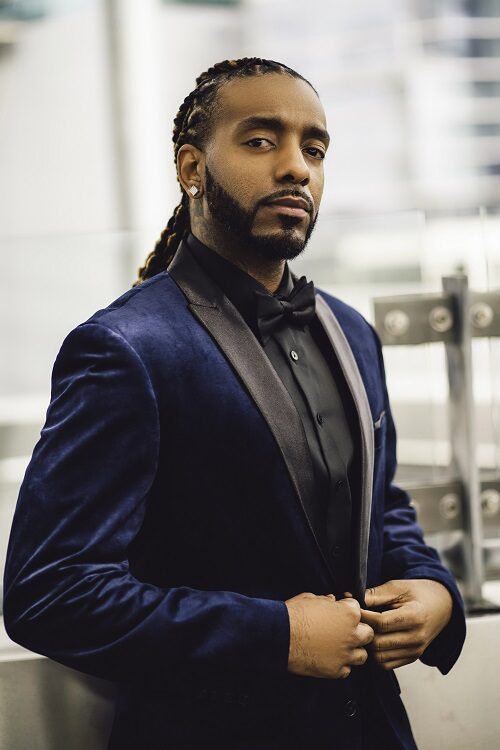 Dru was born in Germany, and soon after his parents moved to the United States where he grew up in Queens, NY., Andrew discovered at an early age his love of music, between the age of 7 and 13 his talents flourished while performing at local talent shows his mother would take him to perform in. It was during this time in his childhood his musical talents were developed.

He was motivated by the energy from the crowd, this experience while performing at a young age sparked his interest to get more involved, as he was hooked and fell in love with music.  Later in his musical growth, he became extremely talented not only as an artist but a songwriter.

This work allows for more created control and gave him a greater opportunity to share his musical talents with the world, in hopes that someday his music would help the listener get through hard times.  His type of inspirational music comes from the sacrifices his mother made to allow him to pursue his music career.

This inspiration which motivates him to be successful not only for himself – but for the sacrifices his mother made early in his career.  There is never enough words to help express and show her, how much she was, and is appreciated.  Dru’s motivation and drive to be successful, fall even deeper as he works hard accomplishing the very thing he promised his older brother John Yates, who’s currently incarcerated, that he would someday make it in the music industry.

Aside from his musical endeavors, he’s always thinking of ways and ideas to better himself as a person.  So he can be a better artist for his fans. And although living life and taking time out to have fun; whenever he isn’t in the studio, listening to different instrumentals to capture his next hit song, it’s safe to say that Dru Yates is your down to earth, ordinary person.

When did you discover your love for music and what made you realize you wanted to pursue a career in it?

I first discovered my love for music at a very young between the age of 7 and 13 growing up in 80’s, listening to music my mom would play throughout the house while she was cleaning; like Prince, Al Green, Marvin Gaye, and Michal Jackson just to name a few. After she noticed I liked walking around the house singing and performing my little dances in front of her to all of the songs she would play, she decided to put me and my two brothers in local music contests, and that was just the beginning.

Doing these music contest, allowed me to perform with my two brothers. We would go up and do Chris Cross as a group, then once we were done, my older brother John would do Michael Jackson. Growing up in the ’80s was where I enjoyed the music the most. The tunes and melodies. I would feel the music and it was thought-provoking.

I always played sports, and basketball was my thing.  So I stopped doing music to focus on playing basketball. But I remember getting a call from my brother John, who was incarcerated at the time, telling me, “Music is what you need to do.” so he pushed me hard to do this music. But it was when I did my first recording, it brought me back to music, and that’s what made me want to pursue it as a career.

What is your stage name, and how did you come up with it?

My stage name is ‘Dru Yates’, it’s a portion of my real name I decided to use, which is “Ahmed Andrew Yates” to keep it as authentic as possible. I took my middle name Andrew and I broke it down. Instead of people calling me Andrew they would call me Dru, and I added my last name which is Yates. Instead of making up one – it just felt necessary

Its apparent, that your music career has been motivated by family, is this where you often draw your inspiration from?

Yes. Usually, my family is my motivation. My mother is the first person I try to think about when I write music. She is the first person that inspires me. Her sacrifices allowed me to pursue music, but it was my brother John who motivated me to pursue it as a career. Yes. Usually, my family is my inspiration. There are times where I find inspiration from personal experiences or maybe even from watching others.

To what or whom do you accredit your style of music?

Honestly, I can’t say just one person, my style is basically a mix of East-coast and Midwest style depending on the track. I really try to keep the lyrical content to every song while still making something you could vibe and bounce to. Listening to New York rap, and growing up in Kansas while listening to down south rap, I would hear both artists from New York with lyrical content, and the south with beats to jam to. The content comes from growing up to the old music I listened to as a kid. So I accredit my style to that 80’s music.

What are some of the greatest challenges you face when creating a song, and what is your greatest attribute when it comes to your work ethic?

Some challenges I’ve come across would be having a lack of ideas and or motivation. Lack of ideas for that particular song I’m making. I would go into a studio and the beat will have to pull the song out of me.  I would hear over two-hundred beats, and still not come up with anything to work on. Out of the two-hundred beats, I may narrow that down to twenty-five, and then down to five, until I find that right one. If I have an idea I will keep coming back to that beat. Going through the massive beats to get that one song is what I’d consider challenging. One word that defines my greatest attribute is dedication. My work ethic allows me to be as dedicated.

Did you face those challenges when creating your hit single “Marry Me” featuring Viral Newcomer Breland, and did your greatest attribute allows you to overcome them?

Yes, the dedication is what made me overcome the challenges of making a song like “Marry Me” because I had to dig deep and speak on finding that one you love while expressing feelings I’ve never experienced through lyrics. So never having the experience of being in love, posed a big challenge. The song is to be a traditional marriage song, so I had to try and pull it out of me by speaking on other people’s experiences.

How did you manage to get “Marry Me” placed on the upcoming Real Muzik Revisited: R&B/Hip-Hop Vol.1 compilation?

After working with a few members of the LS Muzik Group team, and them listening to my music, they selected the top ten best songs to place on the compilation, and “Marry Me” was one of three songs I submitted chosen. So it was an easy decision because good music is timeless and that’s what the entire compilation is produced around – good music. They also agreed that this song has limitless potential.

My plans are to continue making great music. And to hear that I have what it takes to compete with the Drakes, the Kanye’s, and the Jay Z’s. I often visualize myself on stage winning a Grammy or two. Or being on the same charts, and in rotation next to some of the top tier artist in the category.

I’d like to thank God, first and foremost. My mother of course for all of her sacrifices she made to allow me to pursue music. She is my number one fan, she hears all my music and supports me hands down. And my brothers. But more importantly, everyone that has supported my music. And of course LS Muzik Group for helping me strive further with my music career, and reaching new levels.

I would tell any other artist to find you a focal point, if you want to be a writer, producer, singer, lawyer, or anything you want to be, find a focal point. Map out an end goal you want to reach and figure out how to get there. Put a plan in motion, draw an outline, or structure, and follow it. Be dedicated to it. As long as you follow it. Do X, Y, Z until you get there. Do it until you can’t anymore. But make sure you get your business right. Learn your business first. This industry is 90% business and 10% talent. And I’m learning a lot more about this business daily.