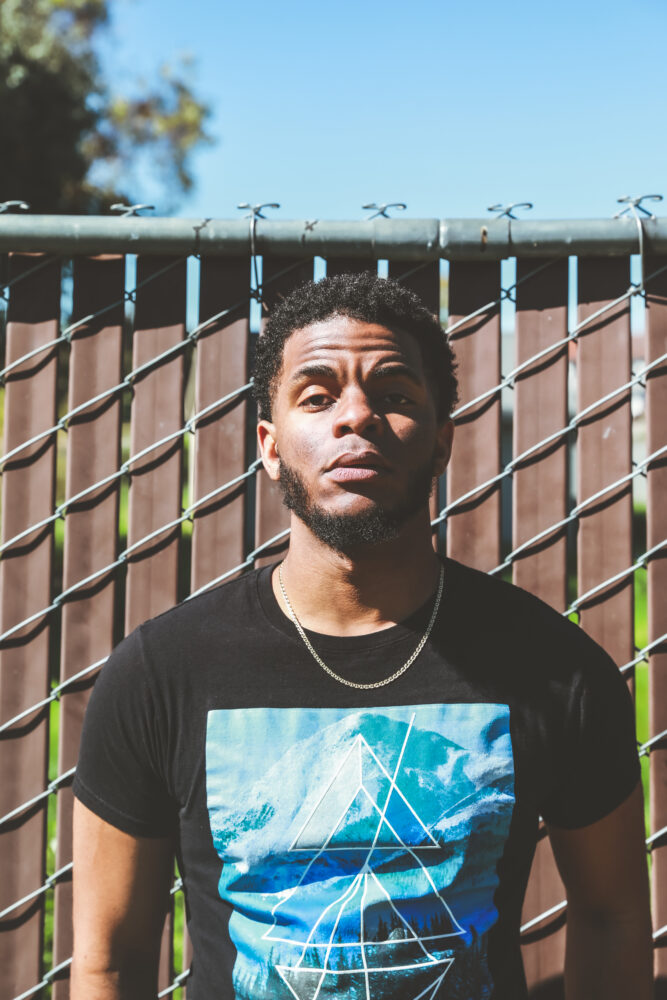 One thing I wanted to avoid was coming up with a stage name that I think works at the moment and turning around and changing it and rebranding myself down the road. There’s nothing necessarily wrong with that.

That was just something I didn’t want to have to go through. Deshawn Forrest is my middle and last name, and I just figured that there was no way I could outgrow my name given to me at birth.

I felt it also had a nice ring to it and decided to roll with it. I’ve yet to think about rebranding.

It took much longer for me to come up with my company name, Transparency. This one was much more difficult.

I’ve always wanted to launch a business under which I release all of my art, but what held me back was the fact that I could never think of a name that stuck. I went through several names before I finally landed on “Transparency”.

I was in a business meeting and our goal was to try and come up with a name. Once “Transparency” was brought up, I knew instantly that it was the right fit given how my art is just that; transparent and raw.

Not too long after that, the papers were filed in things became official in July of 2020.

My story is a little different. I didn’t initially gravitate to rapping or the idea of making music in general. I’ve known people that instantly jumped into pursuing a career in music when they were still kids.

Relative to them, you could say I’m a bit of a late bloomer. I didn’t decide to go down this path until I was 18 years old. But along the way, especially as I was graduating high school, I kept feeling this pull to give music a chance.

I considered other less risky options, but somehow I kept being led back to the idea of trying it out. At some point, I realized that it must mean something that every other avenue I tried to explore kept leading me back to the thing I kept trying to dismiss.

Perhaps, I have something in me to offer the world. So, I stepped out on faith. It felt like the right decision instantly.

I started to get a sense of fulfillment that other paths of life weren’t giving me, and the grind of making and effectively releasing music never felt like too much to handle for me. I ended up developing a deep love for creating it and seeing how people were impacted by it meant the world to me.

I’ve decided to keep pursuing in hopes that one day I could impact the world with the art that I create. Every year it just gets better and better, and the potential just keeps getting greater.

I get my style from a lot of different artists. I made sure when I became an artist to be a student of the game more than anything.

I could also throw in Lil Wayne. I’ve learned a lot just by dissecting their music, interviews, and how they carry themselves.

I try to take note of everything from songwriting, to production, to cadences, inflections in their voice, rhyme schemes, you name it. I don’t think I’m exactly like any one of them in particular, but just studying them and more have helped me to become a better artist.

So, I’m currently in the process of rolling out my brand new album, Transparent 2. So far I’ve released two singles called “A Moment’s Time”, which came out in March, and “Walk Away” which dropped on April 22nd.

The concept for the album stems from the darkest season of life I went through in 2020 and parts of 2021. I went through a rough depression, I was heartbroken and had suicidal thoughts.

I had no self-confidence or excitement about life. Transparent 2 is me healing through music. I poured every ounce of every emotion I felt into this album.

It was like therapy for me. Audibly and visually you’ll be able to catch the full story of the things I went through during this time.

My hope is that it impacts the world and inspires others to heal from whatever harsh situations they went through.

My greatest challenge at the moment is probably staying encouraged. You put so much hard work, time, and money into something and invest your heart into it that you want to see it pay off.

But, these things take time, and I understand that. You just have to keep working, learning, and staying consistent.

I’ll step out of every comfort I have, I’ll invest every dollar I have, sacrifice what I have sacrificed to get to where I want to go in life. I want to succeed by any means possible. Whatever it takes!

No! And even if I reach a point where people may consider me the best at making music, I don’t think I’ll ever think that of myself.

There’s always something you haven’t accomplished and you can only get better through repetition. I can never think I’m the best or at my best because if I do I might run the risk of getting complacent, and complacency is dangerous.

My plan for the immediate future is to release my album Transparent 2. It is set to come out this July. I also have another single coming out from the album in May.

My goal is to maximize the potential of the album in hopes that the music catches on from a worldwide perspective. From a long-term standpoint, my goal is to impact the world with my art.

I want to be able to tour, interact with fans in a more personal way, and overall just expand my reach. When it’s all said and done, I want my music to be passed on from generation to generation.

Yes! I would like to thank and shout out to my family and close friends for the endless encouraging words and supports that they give me.

Oftentimes what they’d say is very timely and I appreciate every bit of how they support what I do. Thank you!

You can find my music everywhere on all platforms! Just type in “DaeShawn Forrest.” Likewise, you find all of my music videos and behind-the-scenes content on my Youtube channel.

Some other of my socials are Spotify, Instagram, and my Linktree as well!