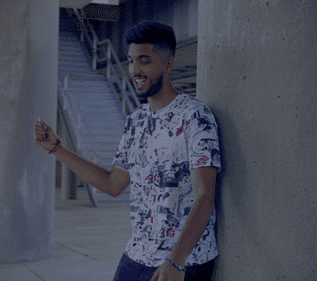 BollywoodRo, an upcoming artist from Maryland, is one that is creating a new frequency with music and meditation. The main message he conveys to his fans is, “Knowing yourself and being who you are give you power”.

He has checked all the boxes for an artist who is poised to be great, including having thousands of streams across all streaming services, and has gained support from Philadelphia legend, Freeway, and managers for celebrities such as Lady Gaga, Troy Carter, and John Legend.

BollywoodRo started his music career due to basketball, using a midi keyboard that he received as a gift from his mother. At first, he was creating beats for his basketball teammates to rap on. He saw that as time went on, and his craft improved, he could tell stories and inspire people to incorporate meditation modality into their lives using it.

So, at college, he decided to share his craft with the world under the name KnowRoBeatz. It took him a while to get that modest buzz when he first started, as nobody wanted to rap or sing to his beats yet. Ro started incorporating recording into his music shortly after his grandfather passed away due to cancer; it was created in memory of him.

This got BollywoodRo in touch with mainstream rapper Cordae’s engineer, Brendan Ferry; he sent him his demo, and Brendan liked it and wanted to work with him. These two ended up collaborating to create his first EP, “It’s Time,” which is now available on all platforms.

His music creation process definitely matches his passion related to meditation. We asked him how he really unlocks the creativity to make the songs, and he explained how he always does a routine of yoga, breathwork, and meditation before he creates them.

It helps settle his mind, body, and emotions as well. Then, he creates the beat. The beat he creates in the moment reflects his emotions, or what he is thinking at said time. Lastly, he writes and records the lyrics to the music. Ro also is an entrepreneur with a business that dives deep into meditation called AŠVA, which assists athletes in balancing their mind, body, and emotions in order to succeed on and off the field.

Together with the staff of Venice Music and Vuzec, BollywoodRo is now working on a number of projects that will be released in the upcoming months. With singles being released gradually to highlight the craft before the projects are published, there will surely be a surge in the anticipation.

As the work is being developed with great care, expect the best of the best to arrive. That said, Ro is undoubtedly a talented artist with a lot of potentials. On this website, we firmly believe that as time passes, he has the potential to reach a superstar level, and spread his message out to the world.