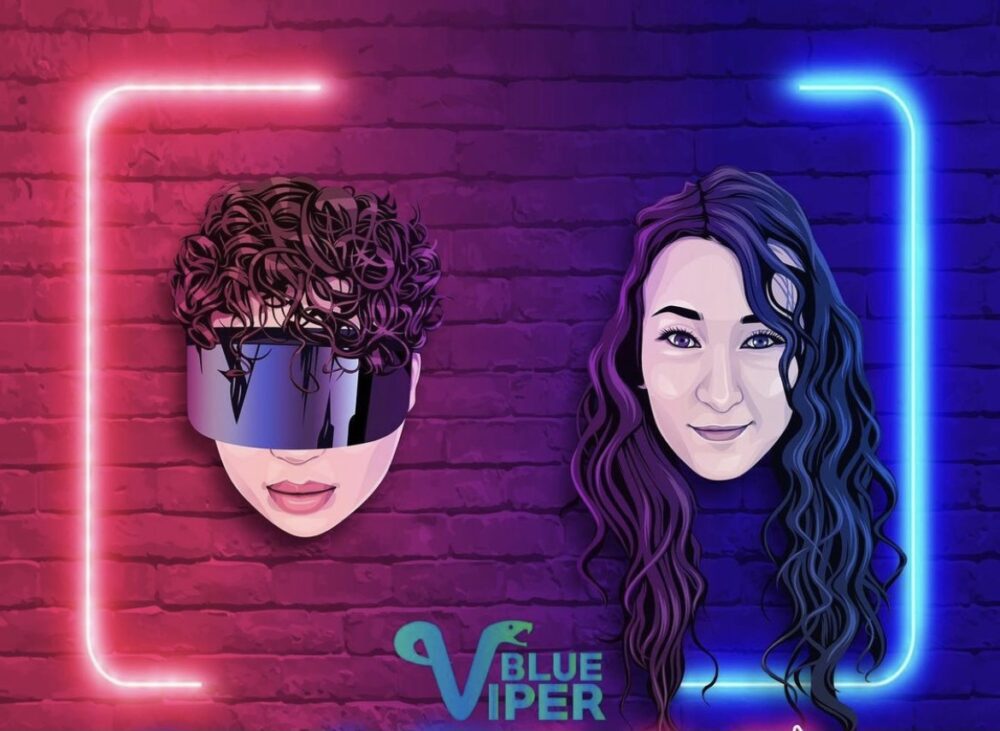 We wanted something that was edgy and also encapsulated the vibe of our music. And we both love the color blue so started brainstorming around that… we basically just put blue in front of everything before landing on the snake idea. Then Blue Viper just felt perfect! It’s also a bonus that there’s actually a real blue viper that’s the most beautiful electric blue color.

What made you want to form Blue Viper?

It was actually when Kiki discovered that I could sing one day. She was already an established music producer and had been working in the industry for years. It was one of the classic singing in the shower moments, about 4 years into our relationship. She was so happy and I love singing and always have been into it, so we thought it could be awesome to join our talents together and see what comes out the other side.

What makes you unique?

We feel like being a gay couple definitely makes us stand out. There aren’t so many female duos out there, especially ones that are in a relationship. And it totally works for us! We’re also unique in the way that Kiki is a female music producer and produces our tracks, we both write on the tracks, and then I sing and she raps with some singing. Girl power for sure!

What are your ethnic backgrounds?

Kiki – a mix of Lebanese, Iranian and African.

Charlotte – a mix of British and Japanese.

We’re such foodies and love to mix it up with food from all of our different countries!

We’re going to be releasing our second EP, and making plans for gigs in the UK this year and next year.

Song-writing is definitely where we get stuck the most. We’re both relatively new to it and we often wake up the morning after writing and scrap the whole track because we’ve got fresh ears and think it sounds terrible! But we find the right words eventually.

As individuals we’re both perfectionists, so as a couple and a music duo we are super perfectionists. Thankfully with us it almost always results in us being really in sync when it comes to what we want the end product to be. We don’t like to settle for less than what we think is amazing.

Is there anyone you would like to give a shout-out to?

Yes! Our amazing record label and management team at Mylo Music Group. Mylo Gregory, Katie Gregory, Andy Grim Cory, Tony Curl. They are a great team to have! We are so excited for our future with them!