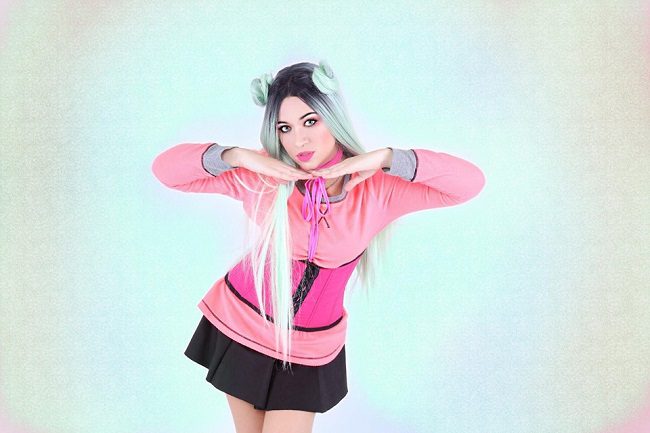 How did you come by your stage brand name?

I know it’s funny because I don’t look like a huge octopus, but The Kraken started back when I started to produce because I didn’t look like someone the producers would expect to write and sing the way I did.

They were very surprised because I could switch into different music gerners as Hip-hop, Pop, Rap, Rock n Roll, in the same song and they also describe my way of composing very different as well, for me it’s like it’s already there, I just can listen to what the song needs to say. My way of creating music gave me this name, but I think it has more meaning now, I believe I’m here to prove anything is possible if you really want it.

My story was supposed to be impossible, a girl with no contacts in the music industry, having to try an international career because my country (Brasil) didn’t accept songs in English, also with no sponsors.

I did it, my music was there, got recognition in Beatport chart, Universal Music Italy and later on Warner Brasil, with a tour in the USA, and now even with fans from Brasil too, my pirates. I always wanted to change people’s energy, and with my pirates, it’s even more powerful.

I started music with singing lessons when I was 13 but I only started thinking like a career around 17 years old because I had the chance to study everything I wanted in music, expand my ideas and improve what I thought I was talented.

It was like a stair for me, first my vocal skills, second music structure, and history, third composing and then producing. But the main reason why I started to work with art is that I thought I could give something different to the world, like the energy for you to be the best version of yourself.

I would say Avicci. I wasn’t sure at first which music genre I would work with, I just had a clear idea of the energy and message I wanted people to have when they’ll listen to my songs.

But when I heard, “Faded into Darkness” by Avicci on his performance at Tomorrowland, I was sure, that was the music genre It would serve best my purpose as an artist. It’s just incredible how you can design a song to make people feel wonderful.

My next single will be about distant relationships but in a funny way. “Moonlight” is about having a strong connection with people through the internet, because now, I don’t feel alone anymore, I have my Pirates.

So when you first listen to it, you will think is a romantic story between a couple and it’s on purpose, after listening in while you will realize it’s friendship, belonging, it’s love and it doesn’t follow any rules, it’s just there and together you have everything.

I speak about having high energy and accomplishing your goals, no matter how your life looks like at the moment because I didn’t have another way but this one back then. I had a lot of people telling me it was impossible, and it was not just by them being mean, it was impossible in fact.

I had to create an international career inside of my room first, I was desperate, studying everything I could not only about music but also about a career. I had to prepare myself to things that didn’t exist at that time, like a singer in EDM considered an artist, like a Brazilian girl recognized as a singer and songwriter in a European Hit Album, with a song about my home, having press and radios internationally with no major record labels, and having my pirates finding me now.

I think my greatest attribute is crossing all the cultural borders and patterns, making people truly believe in themselves like I have to do it in my mind every day.

Yes, every step I take in my career shows me I’m prepared to do what I do, and it’s not just about music, it’s about making a difference as an artist, making people believe they can be their best version. I know that because the key to this process is learning and testing every day, for me, this is my art.

This year we will start doing fan meetings and to be sincere, is what I’m most excited! After the fan meeting in Brazil, we will have our USA Tour and then Moonlight release.

Because of my pirates, we created a new schedule for the entire year, I can even say I’m learning a lot with it, it’s an honor be doing this.

Yes, I would like to thank all my pirates for what they are making me became, for the confidence they are making me feel and for our accomplishments in the future. Is been an honor giving you this energy and being an inspiration to you. Raise our flag, we are one pirates!

First, don’t ever stop studying music, the music industry, your purpose, and your fans.

Second, you won’t figure out everything in one day, and you will walk 90% of the time in the dark, not knowing exactly where it will lead you.

Third, don’t rush to show everyone what you are doing, most of the times it should only be shown to your fans.

Everything that worths require a lot of work, this one is not new but is the truth.