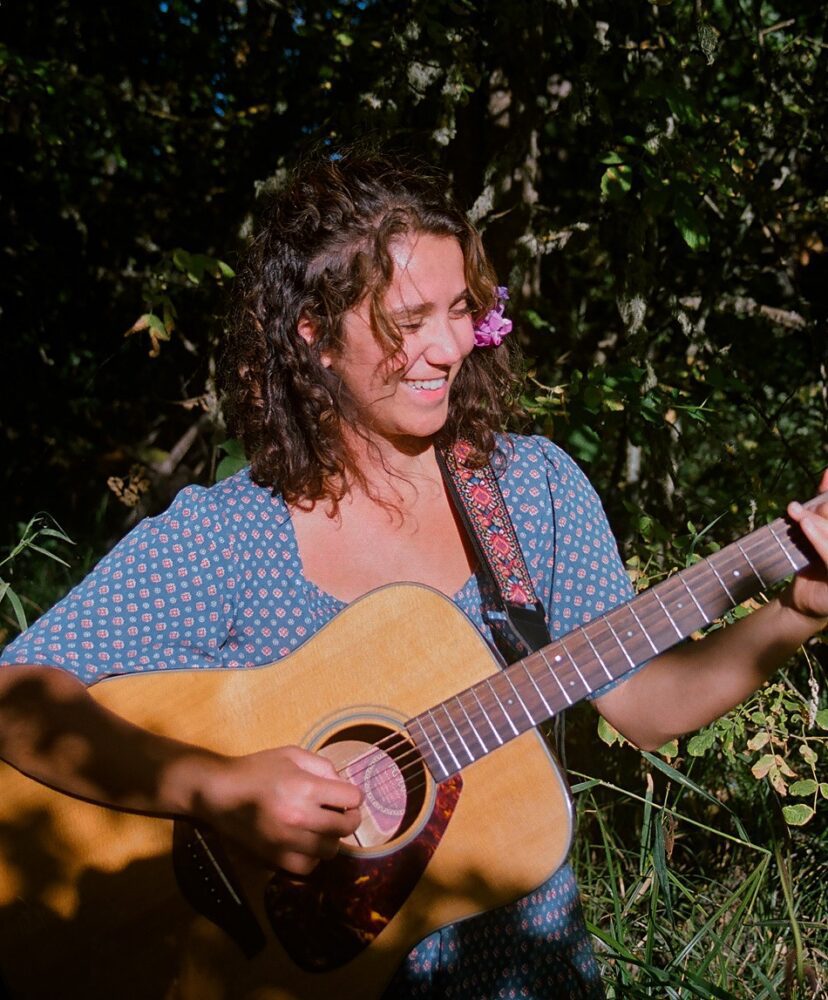 Olivia Klugman is a folk singer-songwriter based out of Portland, Oregon. She released her debut EP ‘Fire Alarm’ in 2019 which is replete with folk tales reminiscent of the golden age of American Folk music. Olivia’s songwriting has a strong storytelling bend to it and she excels in bringing her songs’ characters to life with her rich voice and smooth melodic lines. Today we speak with Olivia about her ‘Fire Alarm’ EP, her musical inspirations, and the PNW music scene.

Your debut EP, ‘Fire Alarm’ came out last year, and it includes some incredible works of folk songwriting, including the eponymous “Fire Alarm”, as well as the single “Sailor Song”. Was the EP created as a whole with a specific thematic intention or was it more a collection of songs that you had written?

Although there was no intentional theme in mind, most of the songs on “Fire Alarm” were written throughout my adolescence, so I often refer to the collection of songs as my personal coming of age story. Because I didn’t originally have plans to pursue music as a career, many of these songs flowed out of me naturally, often as a way to cope with strong emotions I was feeling at the time.

For example, I wrote “The Big Game” after graduating high school, reconciling with the fact that I was entering into the real world. The final line of the chorus, “I’ll never be playing this game to win” refers to an outlook on life I was developing at the time, an urge to reject the ideals of traditional success, and instead to seek fulfillment and a wide range of lived experiences.

“Fire Alarm”, the song, was written after the loss of first love, and “Spirit in Disguise” was written when I still felt I needed to hide who I truly was. My next release will be a full-length album, which will hopefully have a more intentional concept.

Speaking of “Sailor Song”, it as well as many of the other tracks on ‘Fire Alarm’ have that incredible folk ability to paint a vivid picture in the listener’s mind. Where did your inspiration for that song come from?

Telling the story behind Sailor Song always makes me laugh! It was written about a fantasy I had created in my head about someone I briefly spent time with over a single weekend. In my second year of college, I took a road trip with some friends up to San Francisco for a music festival.

We stayed with a friend of a friend who was enrolled in a Maritime Academy for professional sailing. I developed a huge crush on this friend of a friend and romanticized the idea that she would spend her life sailing across the world. I also liked the idea of “queering” the classic, old-fashioned archetype of sailing away with someone.

Caught up in the romance of new experiences, I fantasized about “sailing away” from reality with this new, fleeting idea of a person. I’m pretty sure the subject of the song knows the song is about her, but we haven’t talked since that weekend which happened 4 years ago. But, as I said, the song is more based on an idealized version of a person in my head rather than a true love connection with someone.

Portland specifically, and the PNW in general is famously known for its music scene, what with the grunge bands of the 90’s, the indie bands of the 00’s, and not to mention the countless amazing singer-songwriters to come out of the region. What does that musical legacy mean to you as an artist?

This is actually a tough question! I hadn’t really thought about the idea of leaving a “musical legacy” until now. I think people who leave musical legacies tend to do something groundbreaking in their genre or field. A musician who leaves a legacy might provide a paradigm for future artists of a similar style; artists whose names immediately come to mind when someone mentions a genre.

For example, Bob Dylan establishing the paradigm for American folk music, or Bob Marley’s “Three Little Birds” popping into your head when someone mentions reggae. On the other hand, I think artists who leave a musical legacy tend to innovate and span genres with each release. A modern artist outside of my own genre I predict will leave a musical legacy is Tyler the Creator, because each of his albums could fit into a different genre, each song portrays a unique emotion, and his releases demonstrate his growth not only as a musician but also as a person.

Also, although she is a highly contested character, I believe that Taylor Swift will leave a musical legacy for similar reasons. I hope to demonstrate this personal and musical growth and span genres with my music as I develop as an artist, and hey, who knows, I might just leave a legacy for female singer-songwriters of the 2020’s!

Folk music has long held an important place in the pantheon of American music, such icons as Woody Guthrie, Bob Dylan, Joan Baez and many others have cemented their legacies with their well-known abilities to paint lyrical pictures of desperation, despondency, hope, bittersweet love, etc. What kind of inspiration do you draw from these generational talents, or do you find yourself inspired more by musicians outside of your specific genre?

Joni Mitchell is and has always been my biggest musical inspiration. When I was a little girl, I remember singing along to “California” in my dad’s Mini Cooper crying to “The Circle Game” when I hadn’t even reached 10 years old yet. There is transgenerational wisdom to folk music that I’ve always intuitively understood.

To me, folk music is the definition of power in vulnerability. Folk musicians have the power to motivate revolutions and uncover someone’s bottled up emotions because the musicians themselves are bearing their souls to the world. Throughout the past few years, I have grown to find power in my own natural ability to be vulnerable. Growing into this power has also helped me grow as a folk musician.

What does it mean to you to be not only a musician but a story-teller? What kind of themes and motifs do you find yourself portraying most often?

Again, I think storytelling through song is one of the most powerful forces we have on earth. I work with children, and story songs are always a surefire way to get antsy three-year-olds to sit quietly for any period of time. Protest folk songs of the 60’s and 70’s have become anthems that bring together masses of people to spark change.

I like to think of myself as a storyteller first and a musician second. Ideally, the musical qualities of my songs should serve to support whatever story I aim to tell. I’ve always been a “lyrics first” type of person, and always urge friends to listen more closely to the lyrics of a song I share with them.

Your voice has a soft and effortless quality to it, even when reaching for the loftier notes in your range. Have you had vocal training before or are you self-taught?

Thank you so much! I have had a bit of vocal training formally when I was in high school, but I always chalk my pitch accuracy and vocal development up to my years of singing in A Cappella groups. I sang in an A Cappella group in both high school and college, and both groups felt like a huge family.

At the same time, however, we were very serious about our craft and aimed to sound like one collective “wall of sound”. It was in A Cappella that I perfected my music reading, vocal blending, and pitch skills, so I’m very grateful to have had the opportunity to be a part of something so special.

2020 has been a brutal year for the music industry and especially for gigging musicians. What have you missed most about live performances during this time?

Personally, I’ve had a much different experience than other musicians may have had during 2020. When the pandemic hit, I was just beginning to develop my music career and had only done about three or four live paid performances. I was pretty disappointed throughout March, April, and May that my music career had been halted when it was just starting out.

However, to my surprise, I started getting booked for elopements, small weddings, and outdoor summer restaurant patios over the summer. Although I felt ambivalent about performing during the pandemic, I was so grateful for these opportunities to perform and discovered my joy of providing the soundtrack to celebrations of love. One thing I really do miss is performing at open mics.

Before Covid, I frequented Portland’s “Atlantis Lounge” weekly songwriter showcase/open mic, and it was the most supportive musician community I’d ever been a part of, so I really miss being able to connect with incredible local songwriters and sound engineers in that way.

Because it was mostly other musicians in the audience of the songwriter showcase, I felt that the support was very genuine and carried a lot of positive weight. I’m waiting for the day I can start attending open mics again.

Have you been able to use any of the time granted by the quarantine lockdowns to work on new material?

I have been utilizing quarantine to work on new material! I have a full-length album in the works that will delve even deeper into the territory of the powerfully vulnerable. The collection of songs I have so far for this album range from despair about the world to hypothetical love songs to nostalgia for the days when we could attend sweaty, glitter-filled parties. I’m really excited to put this next album out into the world and hope to be releasing some singles from the album by January or February.

If you could put yourself on a bill with any two current or past musicians for the gig of a lifetime, who are you putting on that lineup with you?

The artists that immediately come to mind would be Joni Mitchell and Adrianne Lenker. While I’ve already raved about Joni, I want to take a minute to sing my praises to Adrianne Lenker. I think she is the most talented songwriter of our generation, and her quiet, understated style asks her listeners to pause their hectic lives to really listen.

2019 and 2020 have been difficult transitional years for me personally, and listening to Adrianne’s music has been a necessary form of catharsis. Her lyrics strike emotions deep within me that I’m not able to release any other way. So Adrianne, if you’re reading this, thank you for all you’ve put out into the world!

My goal is to release a full-length album in Spring or Summer of 2021 and release 2-3 singles in late winter 2021. The next song you can look out for is called “Bubble Water”.

I’m anxious to release new music soon, so you can expect Bubble Water to be released as a New Year’s present to everyone for getting through 2020. The first line of the song is “What do you want me to say to you it’s been a hard year”, which I’m sure almost all of us can relate to right now.

Who is AZA in your own words?
Mauro Lamanna talks about his craft, sense of style and more
Advertisement