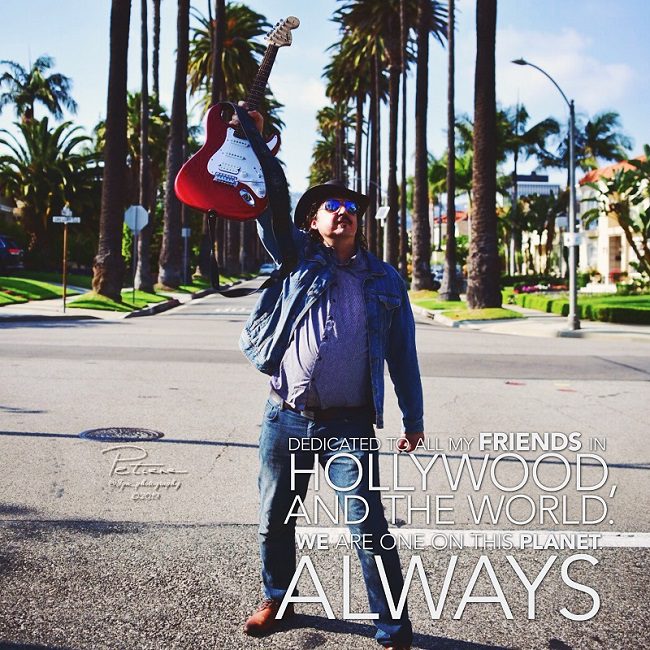 Wolfgang Steinwidder started playing the flute at the age of six years, but always felt, that he was not the kind of musician to play the songs of others. He heard melodies in his head, so beautiful, that he often started crying. At the age of ten, he got his first guitar and started taking lessons.

At the age of 14, he started songwriting (1987). In 1992 he started studying at the conservatory singing and piano. In 1995 he recorded his first songs in Vienna. Then, due to love and private troubles he stopped for several years. In 2001 he started again writing songs. In 2003 he founded a band and wrote ten songs for that project. In 2006 he wrote a classical mass that got never released.

Then he built his own house and studio and stopped again for some years. In 2013 he started again and recorded another unreleased song for a sports event. Since 2014, he built up his studio and wrote several songs. In 2017, he founded Composing4you and finally started going his way in a professional way. Until today 9 songs got released. An album and tour are planned for 2021.

Heya!! Nice to meet ya! I started writing music at the age of 11. My first band project was called “Forever”. In 2017 I founded “Composing4you”, and the idea was simply to deliver a piece of music I was missing on the radio at that point. Well composed music like in the 70s and 80s, knowing that it would be a long and hard way to realize that and get to the point where the famous bands of that time were.

My life is full of important points…points where I surely gut a vision and truly believe. One was, when I was three years old, watching an orchestra in front of my window. I was sick at that point, and I heard it only from far away….but started crying…because what I heard was not what they played in real. I heard a much bigger orchestra, and angels were singing to it.

At that moment I knew that this life would be dedicated to music….but not in playing it…..in writing it. Somehow I also knew at that moment that it would take a long time to get there because nobody understood me. Everybody was smiling at me. They called me a dreamer. Today I am proud to be a dreamer. Oh yes. Another point was my 40th birthday. I was looking back on my life and was unhappy. Still, I didn`t realize my dream…just in peace. No picture. At that moment Composing4you was born.

And the final point happened in Hollywood. We went back from the pub and saw one of the empty still unused stars on the ground. We promised each other to get our names in there. We all were artists. An unforgettable moment, and the birthday of “HOLLYWOOD ROCK”

When I was 8, I got a radio. And I was listening to each new song on the radio, and recording them on tape. I could not afford to buy records. I loved the songs of the 80s and I still do. Some songs I heard a hundred times. I am very influenced by Van Halen, Europe, Bon Jovi, Scorpions, Abba, Boston, and many other artists of that time.

Especially Queen. When 1985 there was Live Aid, my parents had a barbeque in the garden. And they called me to come. But I didn`t come. I was sitting with tears in my eyes, watching the Queen performance, knowing already, that it was one of the big moments of Rock history.

HOLLYWOOD ROCK is dedicated to all the wonderful artists living in Los Angeles, often under poor conditions, but with fire in their eyes, believing in their dreams….every single second of their lives. I love you, guys. I feel home there. And will be back soon.

I had some…smiles. I built my music studio with these two hands here. My greatest attribute is that I never ever give up my dreams. I don`t care if successful or not. As long I can breathe I will follow my dreams. Always. With all my heart. My biggest dream is not even music…its something even bigger. A united planet in love. For all people.

Smiles again 🙂 I am surely not the best musician on the planet. But I think I got real composing talent. Composing has nothing to do with playing abilities. It`s the ability to hear songs, and develop them in your mind without anything else. It`s a gift.

But it also takes a lot of time to develop these abilities…like everything in life. But still, I can play some instruments like organ, guitar, bass, and drums. I studied at the conservatory singing and piano. And got 7 years of guitar lessons, and three years of a church organ.

2021 will be a huge Composing4you year! We will release the first album and start our first tour! That`s one of the undeveloped things of Composing4you…the LIVE SHOW!!! Wait…smiles 🙂 just wait.

Oh yes. If you go a difficult way it takes some angels helping you. One of those is my ex-wife Margit, who believes in my dream with all her heart, helping in many things.

There was a day where I had to decide between a relationship and music. And you see the result 🙂 Another angel is the director of my bank. (lol) nothing more to say….right? AND A BIG SHOUT OUT to my friends in LOS ANGELES!!!!!!!!!! HEYAAA guys!!! I love and miss ya like hell!! Heard that some of you are succeeding in your way. So happy for ya!

There is a bar in Los Angeles on the left side of Hollywood Boulevard…..OHHHH you didn`t mean that!! Btw greetings to my friend Lurance…great pic!! Oh, you meant the internet, right? I don`t have any internet. No. No. No.No…(don’t slap me…lol)

All the news are on composing4you.com/News

Making music is a lifelong journey. Never try to follow the steps of others. SImply make your music, and release it. And interact with your fans to find out what they think. And learn every day. Your way will come along. God will show you your way. That`s why you should visit him sometimes and light a candle for him. Because it is all in his hands.

Thank you for that beautiful interview. I loved being here.