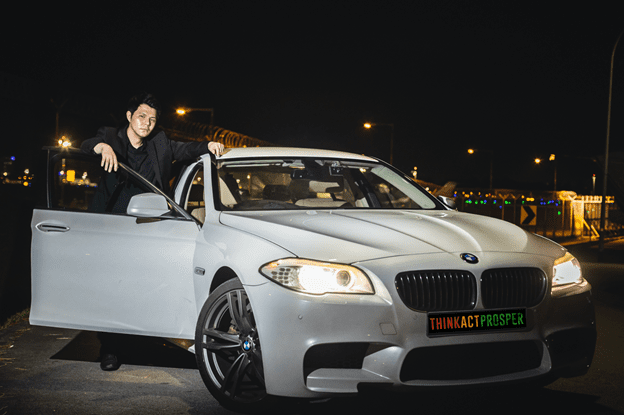 How the Think Act Prosper movement is taking over the world.

Music is life. That’s what Wilbert Wynnberg turns to whenever he’s happy or sad. Born in Singapore, Wynnberg grew up in an abusive, low-income household, and under the influence of his environment and bad company, he walked down the wrong path for many years. He joined a gang in his teens, dropped out of school, became an alcoholic, and at one point, was a gambling addict who experienced 5 to 6-figure daily swings at his peak. Fortunately, he was able to pull himself out of his self-acknowledged “degen phase” and put his life back in order. As someone who knows how difficult it is to put themselves back on the right track and commit to it without distraction, Wynnberg has been living with a renewed purpose of helping as many people as he can—first through his book, and now through his latest album, Think Act Prosper, consisting of the following tracks:

Today I had the opportunity to sit down with him and ask him a few questions.

Q: Thank you so much, Wynnberg, for joining me today. For people that don’t know much about your background, would you care to share with us just a bit?

A: Thank you for having me. I grew up in an abusive, low-income household, and under the influence of my environment and bad company, I walked down the wrong path for many years. When I was conscripted to serve my mandatory two years in the Singapore Armed Forces, I ended up being locked up not just once, but twice, in the Detention Barracks for a total of 12 months, and that’s just one of the many highlights—or rather, “lowlights” on the wrong path I took when I was younger. Luckily, I was able to pull myself out of that “degen phase” and put my life back in order. Today, I’m on a journey to inspire and help as many people as possible.

Q: Before you released this album, you were known as a serial entrepreneur and bestselling author. How did you get started in entrepreneurship?

A: When I was young, I was growing quite fast for a kid and I liked to snack. Because of our financial situation at home, my parents didn’t give me much allowance, and there were times I had to go hungry because I couldn’t afford to eat. So from a young age, I found side hustles just so I could feed myself. For example, when I was in primary school, Pokémon was the craze. I remember visiting my friend’s house one day and discovering that he had a printer. I asked if I could pay him a certain amount of money for every piece of Pokémon I asked him to print for me. It was during that time that I began to understand supply and demand, and how to create premiums. I would tell my buyers that I could only print a certain amount of Pokémon each time due to my parents limiting it. I was also able to charge up to $2 for a colored Charizard, as compared to $0.50 for a colored Psyduck. These two Pokémon were printed on the same paper with the same amount of ink, so why were they priced differently? Simply because more people wanted Charizard. Anyway, I had a good run and made money off that side hustle for 2 months. Soon, people started copying me, and the price crashed. That was when I stopped doing it and then moved on to my next hustle, then my next, and so on. I learned a great deal from those hustles as it eventually shaped my identity as an entrepreneur.

Q: Wow, that’s so cool! I need to ask you for more advice on entrepreneurship next time. Now moving away from that, your latest album is a collection of instrumental tracks, with no lyrics. What’s the inspiration behind it?

A: Everyone has their own ups and downs. What I’m trying to do here is to create music that people can “fill in the blanks” with their own experiences and inspiration translated into lyrics. I want people to express themselves creatively.

I don’t want my songs to be about me. I want my music to move others and get them to express themselves. I want them to sing about themselves, to embrace their moment, their life.

Q: Which musicians have a deep impact on you and your music?

A: Growing up, I was a huge fan of Eminem and Pitbull. What I did with this album is to try to replicate a little of both of their “flavors”, or so I believe. Essentially, I just want people to hang in there and not quit. And if someone like me can now create music, there are definitely people out there more talented than I am, and there’s absolutely no reason why they shouldn’t go do what they’re good at. Just imagine how many really good musicians are out there that are silenced by their own limiting beliefs and the naysayers.

Q: When’s your next album? What’s next for you?

A: I’m not really sure. The way I produced my first album was by journaling what had happened to me over the past few years. From getting locked up to surviving two skydiving crashes and more, I replay those experiences in my mind, hum the notes that are evoked as I recall those experiences, and form tunes out of them. Over time, I had enough of those and found a way to translate everything into a beat. We’ll see, once I go through the next phase of my life, I should be able to put together another album. Of course, vocals are something that I’d definitely explore. As to what’s next, I’d like to continue growing my company, traveling the world, and inspiring as many people as possible. And for those who want to read my book, they can get it on Amazon!