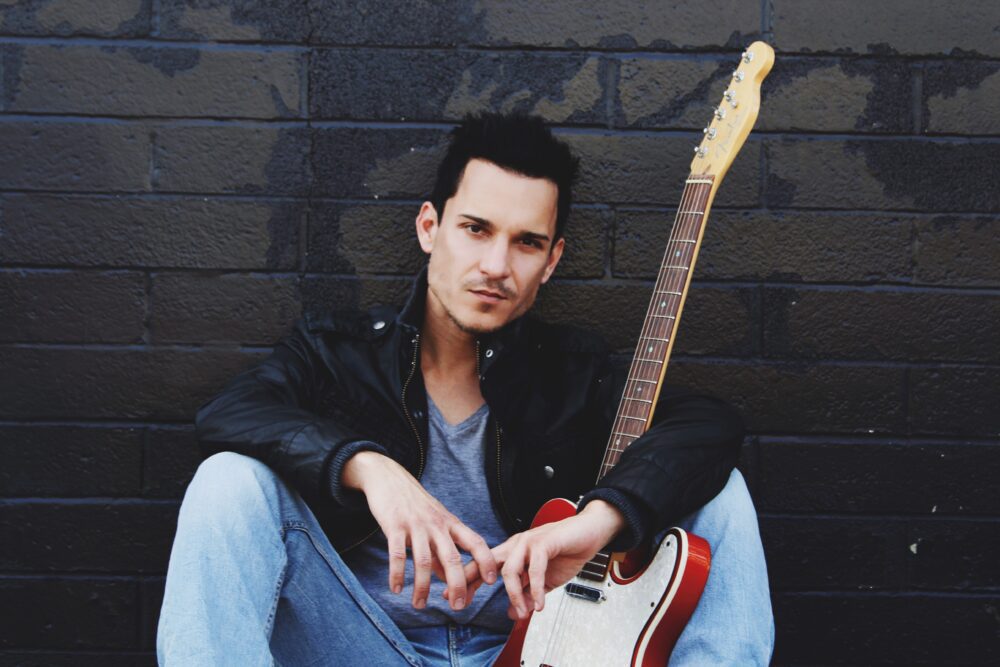 Chris Poulson is an American Singer-Songwriter from Burbank, California. He is a seasoned musician, who has been in the music industry since the mid-1990s, Chris Poulson’s career started from early beginnings in his high school marching band drumline and progressed to being signed with Fearless Records rock band, Rock Kills Kid as a drummer in 2001. He found himself touring and sharing the stage with headlining and national acts.

In the mid-2000s, Chris left drumming to focus on singing and songwriting. The music world noticed and featured him in industry magazines and TV. In 2021, Chris released his debut solo EP digitally worldwide, “Fall Into Pieces.” His newest single, “Can’t Let Go”, drops on all streaming platforms Friday, July 29th, 2022, along with the, Can’t Let Go (Official Music Video) which will be released on August 2nd, 2022!

I discovered my love for music at a very young age. I believe I was about 13 or 14 years old when I knew music was something I wanted to do. I remember telling my parents next door neighbor that I started playing the snare drum in my middle school band class. Which he replied, “I used to be a drummer myself and I have an old drum kit that I don’t play anymore, would you like to borrow it for a little while and practice on it?” And which my reply was, “Yes, absolutely!”

From what initially turned into only borrowing the drum kit for a month or two, turned into several years! I tried giving it back to him many times and he told me to just hang on to it, “At least it’s being put to use”, he said. I had the drum kit set up in my parents living room, Oh, how they LOVED that. I practiced every chance I could get, especially when they weren’t home.

From there it was onto high school where I ended up meeting a few guys I would soon start a band with playing Nirvana covers and a few originals. After that band had parted ways, I met a guy in my Spanish class whom I became fast friends with. He mentioned he had a buddy who played bass and we would then later start a band of our own playing punk rock music, which consisted covering bands suck as, Blink-182, Green Day, and MxPx, to name a few.

We also wrote and recorded our very first 3-song EP and released it via cassette tape and CD to our high school friends and classmates.

I would say my sense of style derives from my early beginnings listening to Nirvana, and Green day, with just a little touch of Country music.

The concept for my current project came about after a long stint either with bands I formed and wrote for or filling in for bands who had lost or replaced their lead singer. These projects were all pretty much short-lived, maybe lasting a few years or so.

I figured, where I’m at in my life and music career, it was time to take full control of my concept and vision. Whether it be creatively, musically, calling the shots when it came to live shows, and how I was to be marketed at this point in my career.

I have faced many challenges in the music industry. It is already a difficult scene to breakthrough through. However, I believe the timing is everything. Right place, right time, if you will. My work ethic stems from my mother and father.

No matter how much they had on their plate or with very little to start with, they did what they had and needed to do to build a better life and provide for my brother and me. So, I guess you can say my strongest attribute would be that I never fully give up. No matter how hard something seems or how difficult it may appear to be. I’ll push till I can’t push anymore.

I wouldn’t say I am the “best” at what I do. I know what I’m capable of, and I do that well. I don’t believe one can ever be The Best at anything. There will always be someone out there who has talents that may outshine you. But, to me… I’m not in any competition with anyone. I am in competition with myself. To better myself and my craft to the best of my abilities.

Well, I just released my newest single, “Can’t Let Go” on July 29th, 2022, and followed up with a music video for the track, which was released a few days later on August 1st, 2022. From here, it’s to get my new sound, vision, and project seen and heard by the masses. I plan to release new singles at least a few times a year and follow that up with live performances in Los Angeles.

Wow. There are a lot of people who have been not only supportive of me but have helped keep me motivated, and inspired, and even helped get my project off the ground. I’d start off by thanking my parents, and my brother.

Pretty simple to be found nowadays. Especially with social media and technology. I was recently Google verified, so my name and title are the first to appear at the top of the search results. However, I can be found on basically the most popular social media sites, Instagram, Facebook, TikTok, YouTube, SoundCloud, Apple Music, Spotify, etc.

I am a very strong advocate of believing in oneself. It’s hard enough to get where you need to be in life, especially with any obstacles that may come your way. And, sometimes people aren’t always as supportive as you’d like for them to be. But that’s okay. As long as you believe in yourself, nothing can stop your growth and success in whatever you put your heart and mind into.