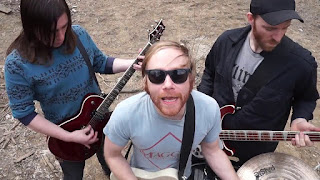 Recorded, produced, and mixed by the legendary Mitch Easter (Avett Bros., R.E.M., The Squirrel Nut Zippers, Pavement) at the Fidelitorium (Kernersville, NC), All Shook Up takes the band’s eclectic sound on their previous release (Holy Moly) and ratchets up the fusion of genres that shape the infectious Thirsty Curses sound. In the midst of recording the album, front-man Wilson Getchell stated, “The only way you’re getting these songs out of your head is with a bullet.”
Starting off with the boisterous “I Can’t Keep Up” and ending with the reflective “Long Folk Revival”, the band’s second outing draws from a variety of influences, as each of the individual members maintain a healthy and diverse musical appetite, evident throughout the group’s extensive catalog. Divided into three “movements”, the band seamlessly juxtaposes honest and self-referential topics such as difficult relationships, dead-end jobs, and shaping one’s sense of self with tongue-in-cheek observations about “Today’s Kids (Are Not Rockers)” and the state of the world today.

In the guys’ own words: “We received a lot of feedback from the last record that there was something on there for everyone to enjoy and we wanted to carry that aesthetic through on this record… but this time around we wanted to make the punk songs more raucous, the ballads more soulful, and the rock-jams more epic in scope.”

After a listen to the final five contiguous tracks on the record, the boys have undeniably achieved a grander soundscape through the additional harmonies of Kevin See’s raucous lead guitar and the dynamic interplay between Tradd Yancey’s and David “Keebler” Henry’s toe-tapping rhythm section which never seems to take a breath. Wilson Getchell’s catchy vocal melodies are beautifully complimented by additional backing vocals throughout the record, which provide another layer of pop-sensibility to the diverse song selections and only add to the “ear-worm-quality” of the tracks.

On the whole, All Shook Up is the perfect summer record to blast while driving to the beach with the windows down, to crank up late at night for a pick-me-up, and to find the hair-of-the-dog the next morning. Just be prepared to relentlessly hum the tracks while at work, including the NSFW ones…

For additional information, promotional copies of All Shook Up or Holy Moly, email: thirstycurses@gmail.com