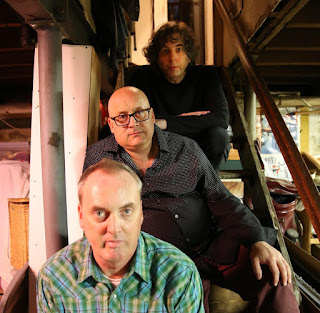 The Hasbros. The band hails from New York City (actually the suburbs, but that doesn’t sound as cool).

Muzique Magazine. When did you start making music and taking it serious?
The Hasbros. Our back story really amazes people. We played the New York club circuit in the 1980’s and early 90’s. We played some really famous clubs and opened for The Spin Doctors and They Might Be Giants. Unfortunately, the only way to “make it” back then was to get signed to a label. We were scouted but our timing was always lousy. We were too hard/heavy for the pop of the 80’s and too early for the onset of grunge and by ’92, we had had it. We had been at it for 7 years and that was enough. Although Joe (drummer Joe Gorelick) kept at it and toured the world with King Missile, Marah and Garden Variety, Ken O’Connor (guitar/bass) and I just went about our lives. We hadn’t even talked much when we got back together 25 years later to record this record.

Muzique Magazine. How do you feel about the present state of the music industry?
The Hasbros. It’s great and it sucks all at the same time. I love the fact that the people have gained control from the big record companies over which bands get heard. It’s easy to DIY right to your audience. On the other hand, anyone with a computer is putting something out which can make it overwhelming for listeners because there’s just so much music out there and, because it’s “Do It Yourself,” there’s no quality control. I don’t mean that I’m the arbiter of what’s good and what’s not (and I’m sure some people love us and others not so much), it’s just that with so much music out there, people have to sift through to find something that’s in their wheelhouse.

Muzique Magazine. Who influenced you to become an artist/band? Why?
The Hasbros. The great thing about this band is that we really have varied musical tastes that we bring together to create our own sound. Although we all have a love of The Beatles, Kinks, Stones and classic American rock, I also loved the pop of Nick Lowe and Squeeze while Ken loved Led Zeppelin. Joe was really into Rush and The Police. Take all those prior influences and then throw in the Husker Du, Black Flack, Minutemen and the Meat Puppets that we were listening to, top it off with some R.E.M. and Replacements, and there you have The Hasbros sound. Many reviewers find it more relevant today than when we were younger. We have always loved music and that’s why we’re back at it!

Muzique Magazine. What are you currently working on and how can the people find you?

The Hasbros. Most of our info is on our Facebook page which can easily be found through TheHasbros.com. People can also listen to the record on Soundcloud (https://soundcloud.com/the-hasbros), iHeart Radio, Pandora and many other streaming sites and can purchase the album on iTunes, Amazon and CD Baby which also has the exclusive on vinyl sales of the LP.
We are currently playing shows and trying to get as much attention as we can to get people to hear the record, which we are really proud of. We want to thank Muzique Magazine for taking the time to talk with us!