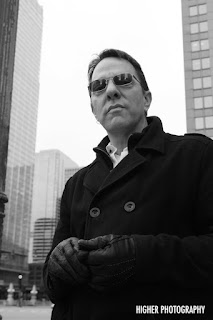 Interview With the Multi-Talented Indie Artist and Author, Phil Circle

Muzique Magazine. When did you start making music and taking it serious?

Phil Circle. I grew up in a musical household. My mom was a musician, producer, and music writer. My five siblings and I were all required to pick up an instrument. I went through a few other instruments before I convinced my mom to buy me a guitar. I didn’t begin taking it seriously, or at least approaching it with the right mindset, until I was 22. I found myself hospitalized from exhaustion that triggered a near fatal asthma attack. I’d been chasing the almighty dollar, working three jobs and barely sleeping. Partly, it was 1988 and that was the cultural climate. Partly, I thought that money would make music happen for me. After that experience, I realized I needed to be focused on the art itself. I’ve been trying to maintain that balance ever since.
Muzique Magazine. Would you prefer to be independent or signed to a major?
Phil Circle. The only thing that would coax me into a major record deal would be if it were strictly a distribution deal. That is, I’d have the label handle wider distribution than I can handle on my own. They’d be nothing more than a wholesaler. In my book The Outback Musician’s Survival Guide, I spend one chapter on the business. In this chapter, I illustrate how an independent artist can make as much selling 40,000 units as a major label act makes selling a million. And nobody owns you when you’re an independent. The standard major label contract really sticks it to the artist, I’m afraid. I know they try to justify it with expenses and such, but in most contracts, the artist’s cut pays those, too! If you go platinum (One Million Sold), you get $138,000. The label gets $6.9 million. You’re getting 2.9%. That’s pretty lopsided.

As an independent artist, I make a middle class living doing what I love to do. I maintain control over the what, how, when, and where, of my work. Of course, it all falls on me to get things done, so I have nobody to to blame if things go wrong. But, I also get to take full credit for a job well done, ha. Frankly, you can’t even get a major record deal until you’ve established yourself to a degree. Every musical artist has to be an entrepreneur for at least awhile, before they can even get signed. That’s okay. If you think about it, it gives you time to understand the business you’re getting into, and to establish how you’d like things to go. You’re a whole lot less likely to sign an unfair deal if you know how things really work. It’s well worth it.

Muzique Magazine. Who was your inspiration?
Phil Circle. The intrinsic motivation of all human beings, unless they’re sociopaths, is to solve problems and help each other. That is, we naturally enjoy making other people feel good. We get off solving problems, simple or complex, depending on who we are. Music not only gives people a solvent, a medicine, for the ills we feel. It also offers a feeling in the moment that we’re experiencing it, that something has been explained to us about the human condition. It’s our on-going answer in the moment, and a universal language. It’s like laughter. Have you ever noticed how, when you laugh, in that moment of laughter you forgot everything else? As I found answers, even partial or temporary ones, in music, I became interested in more. I began writing to understand. So, my basic inspiration was to understand. I still don’t entirely. That’s good. I need more to write about. These are things I also talk about in my book.

Muzique Magazine. Tell us about your new project.
Phil Circle. My latest widely available musical release is a single called “What I Mean.” It’s a slight departure from my more blues-based progressive folk style. It’s a ballad of hope. It wasn’t planned, but it could be the title song for my book, if it was made into a movie. Any takers? I’ve got several albums out and a few of them have produced popular singles among my listeners, but this is my first actual release of a single. I like albums. I enjoy piecing them together. I just released a Limited Edition CD and booklet, too. It’s called ReCircle. Most of the tracks are no longer available elsewhere, were never released, or are alternative takes. The songs span my career. The booklet tells the story behind the track; where it was recorded and when, and what I was writing about. It’s only available through me directly. Copies are numbered and signed. Once they’re gone, that’s it. Next up? I’m getting ready to start a vinyl release. Then, of course, there’s my book. After years of being told I needed to write down my stories, I finally did. I made a simple collection of stories without much thought to whether they were one overall story. I included my thoughts on the business and craft of music, crazy stories from touring, and various other personal experiences related to my being an independent musician. People liked it well enough, but asked for more. After my life turned one more corner a couple years ago (I turned 50), I sat down and reworked the stories. I threw a few out, added some more personal ones, and arranged them into an proper storyline. It became my life so far.

Muzique Magazine. What does it mean to you?
Phil Circle. The book? It means a lot. It’s about more than survival. It’s about hope. It’s about personal passion and maybe even a sense of mission. It’s about thriving in spite of oneself. Whatever happens to the major label acts, happens to folks like me. You just don’t read about our hardships in the media. You don’t read about our victories, either. But we experience both. Judging by how beautifully critics are responding, I guess I struck a nerve, in a good way. I couldn’t be more grateful. It’s made my personal struggles over the years so much more worth it. That’s as live should be. My single touches on all this, too.

Muzique Magazine. What was your biggest risk taken in your career?
Phil Circle. When I started out, Indie/DIY music was something you couldn’t get an agent or manager or you were simply nuts, or perhaps a stubborn kid. I know I was the latter. Realizing that the eclectic nature of my music would make it hard to get signed, I had a couple choices. I could conform my music to what the mainstream liked or I could find a way to do it on my own. Two things factored in. While my mom was in music, my dad was in business. He was a very successful entrepreneur. He also raised me to follow my passion. So, I had already dabbled in my own businesses. How was this business different? I was certainly going to find out. A second factor was that I read of someone in a major magazine who was previously unheard of. She was breaking the mold by producing and managing herself, and it was working for her. I figured if she was doing it, others were, and I should. That was Ani DiFranco.

Muzique Magazine. What suggestions do you have for other artists like yourself?
Phil Circle. If they’re really like me? Watch out for you ego, ha! We may feel visionary and unique and brilliant at the very moment an idea occurs to us. But, I guarantee it’s occurring to others, too. That’s not a bad thing. It’s nice to not be alone. Seek out like-minded people and pool your resources. You’re never truly alone. Reach out and ask fans, friends, and family for help. When that fails, reach out to somebody you see who’s doing what you want to be doing. Once again, humans actually do like to help each other. You’ll be surprised. Mostly, be sure you believe in your purpose. If, like most of us, you don’t know your purpose with any certainty, just know that you have one. Hell, you wouldn’t be driven to create without purpose. Keeping this in constant mind and believe in yourself, and it gets easier. I saw a book once. It was called The Magic of Thinking Big. I didn’t have to read it. The title said everything. Also, you’re an entrepreneur. But that word isn’t what you think. The actual definition of entrepreneur is “someone who undertakes an endeavor without any guarantee of future returns.” But that’s just the business end. Because, as an artist, you will always experience returns beyond your wildest dreams. Every day you create. Each person that says they like it, it’s like a big, fat, warm hug. It truly is.

Muzique Magazine. How can potential fans find you?
Phil Circle. Search for Phil Circle or The Outback Musician’s Survival Guide. I’m everywhere books and music are sold online. I’m also on Patreon at patreon.com/philcircle. I’m @philcircle on most social media, philcirclemusic on Instagram. And my main page is philcirclemusic.com.

Stefan Barbuceanu talks about his craft, sense of style and more

Fat Panda Tuan talks about his craft, sense of style and more