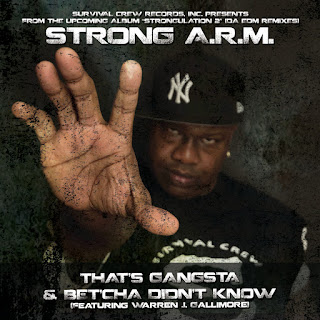 Muzique Magazine. How did you come by your stage name?
Strong A.R.M.  Back in the day, I was in a group. After a while though, the group broke up, and I went solo. The name I had in the group was not good enough for a solo artist. I searched for about a week, and finally, one of the dancers from the group said, “… you should call yourself ‘STRONG A.R.M.’, and I thought, hey, I like it because it describes me totally in mind, body, and soul! And that is who I have been ever since! By the way, the A.R.M. stands for ‘A REAL M.C’.

Muzique Magazine. When did you start making music, and taking it serious?
Strong A.R.M.  Once, I heard ‘Rappers Delight’ at a young age. It was a turning point for me as far as my involvement with the Hip-Hop culture would later go. My mom bought me that record, so I guess I have her to thank! Before Hip-Hop, I felt like I had no kind of identity whatsoever, and when it came to certain things, I would always get passed over. Once I started rapping though, people started recognizing me a little bit more, haters included (laughs). As time went on, Hip-Hop gave me my walk, my talk, my style, and basically my whole self-esteem came from being a part of the Hip-Hop culture.

Muzique Magazine. How do you feel about the present state of the music industry?
Strong A.R.M.  Back in the 90’s, N.Y. Underground Hip Hop was all about the BOOM BAP!!!! And MAD LYRICS!!!!! It was very aggressive!!!! You couldn’t just call yourself an MC, YOU HAD TO SHOW AND PROVE!!!!! You had to be ORIGINAL!!!! N.Y. was big on the rule NO BITING ALLOWED!!!!! And today N.Y. Underground Hip Hop maintains that same element!!!!! There really is not many Hip Hop artist in the mainstream music scene right now. There are some but the majority of them are RAPPERS though. LOL….You see rap is only a part of the Hip Hop culture. A bunch of the new rappers nowadays will tell you….”I am not a Hip Hop artist, I am a ROCKSTAR!!!!”. That is fine if that is what you represent. My problem is joining what they do with the Hip Hop culture!!!!! It is two totally different things.

Muzique Magazine. What are you currently working on, and how can people find you?
Strong A.R.M.  I am currently working on my EDM project entitled : STRONGULATION 2 (Da EDM Remixes) which comes from my original Hip Hop album STRONGULATION of which we are re-mastering right now. If everything works out right, you will be able to get BOTH projects by next year. Until then I am currently promoting 2 tracks, THAT’S GANGSTA (EDM Mixes) & BET’CHA DIDN’T KNOW (EDM Mixes). Both of these songs also has a Hip Hop version to them.

Because of this digital world we all live in now, I am proud to say that I am ALL OVER THE GLOBE digitally speaking. Here are just a few of them :

I am on SPOTIFY : https://open.spotify.com/album/2w65daWODpmaLGH5DSh68Z

I am on GOOGLE PLAY : https://play.google.com/store/music/album/Strong_A_R_M_That_s_Gangsta_Bet_cha_Didn_t_Know?id=Bt5pns22ljfzupayjyvk676wzoy

I am on NAPSTER : https://us.napster.com/artist/strong-arm/album/thats-gangsta-and-betcha-didnt-know

I want to thank Muzique Magazine and all their affiliates for being a part of Strong A.R.M. and Survival Crew’s journey!!!! SALUTE

I want to give a big shout out to my man Warren J. and Survival Crew Records. They always had my back and they NEVER GAVE UP!!!!! SALUTE

Stefan Barbuceanu talks about his craft, sense of style and more

Fat Panda Tuan talks about his craft, sense of style and more