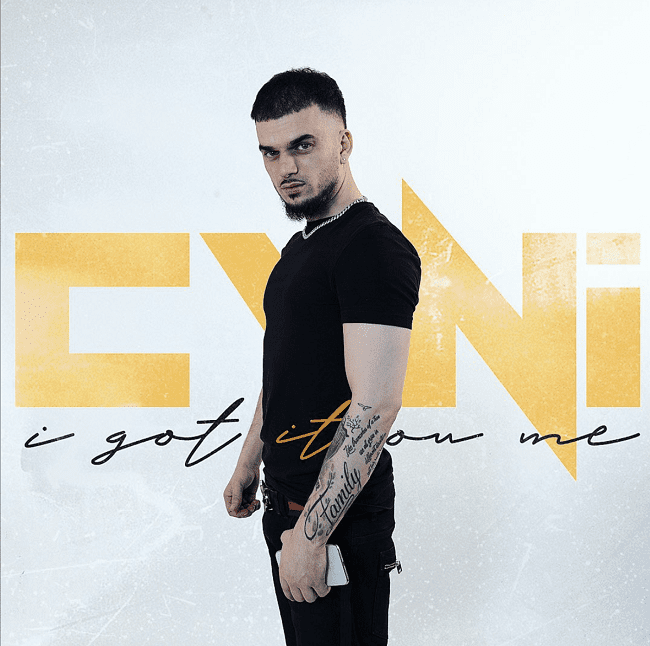 Since a child, my mum would call me (Syni) which means (eye) in Albanian. I guess she was really fond of the color of my eyes since birth. Growing up, I can admit that I was very vicious of everyone around me. Part of my personality brought out a dark side of me, so students nicknamed me “Cynical”! I had no idea what it even meant at the time but I got used to it after a while. It had a ring to it, and so the name stuck.

On my 13th birthday, a few friends came over to my house. They heard my mum calling me Syni, so the following day in school, it was news that my mum also calls me Cyni. It was obvious they didn’t know one letter made a huge difference between the two meanings, but I wasn’t gonna give them a language lesson so I just went with it.

Shop Zappos: Sale items are back!- Find amazing deals on hundreds of items from your favorite brands!

I’ve always found a way to turn any situation into a positive outcome, so I started graffiti-ing the name around the school walls, tables, and etc. Syni, was now cynical, which was shortened to CYNi, so I found a unique style of writing it all in capitals with a small “i”, and I have proudly represented myself with it long before I even got into music.

When did you discover your love for music, and what made you realize you wanted to pursue a career in it?

I’ve been fascinated by poetry since 14 years old. I was always good at writing about my past and present experiences, sometimes even future premonitions. Furthermore, it made it more fun to challenge me in making it rhyme.

Like most kids in school I got into a lot of fights, and at some point was sent to anger management classes. To me, it was simply detention. At the end of my anger management program, I was asked which lesson I liked most, and I said music! Only because in music lessons, we used to find a way to mess around. So the school gave me a “pass” that would allow me to attend the music department during my other classes for an hour every day if I felt I needed the relaxation, or step away from a bad situation!

Getaway to Florida with these flexible cancellation vacation rentals from Vrbo!

I took advantage of this “pass”, and every time I would dislike a lesson I would use this “pass” to go to the music department. I would start experimenting with the instruments in the empty classrooms. My favorite instrument was the keyboard and the karaoke machine.

After a year, I started liking music, and it became a passion. However, having violated the use of this “pass” it eventually got stripped away. Being immigrants to the UK, my family was really poor so I couldn’t ask my parents to buy me an instrument, but eventually, I did and it didn’t go so well. I made a habit of visiting the music store almost every day after school, and coincidentally my dad found me window shopping. I now know this because a year later he presented me with the same keyboard he had seen me stare at through the window.

I used it all the time. The keyboard had a build-in microphone and I would sing along whilst playing. I’d take these projects to school on my USB so I could show it off to my friends and teachers. Shortly after, thanks to my music teacher’s doing; one of my projects was played live on BBC daytime radio. It was a big deal for me at the time.

Few years after that, Grime in the UK was a big thing, so I got deeper into modern-day music and I found myself battle rapping around school and college, attending pirate radio sets, and attending professional studios. However, shortly after finishing education, I stumbled on life issues which drew me away from music completely.

Only recently, since the murder of my best friend, I came to the realization that life is too short. Hence why I’ve decided to take music seriously again. Now I live life doing what I love most.

How did you come up with the concept of your single “Beggin iT”?

I hardly ever pre-write music! Everything I record is in the heat of the moment. Music for me doesn’t have to be perfect because it’s art, and in my opinion art with perfection has no relationship. Therefore, everything I record is based on what I’m feeling at that particular moment.

I’ve been through phases in life where I’ve had nothing which meant nobody was willing to help. To be in a position where you have it all, which meant everybody now wants to acknowledge you and the benefits you come with. I guess at that particular moment I felt to record a project regarding the subject that was running through my thoughts at the time.

A lot of my lyrics are also prophetical and have multiple meanings. Even though It’s reached over 200K on Youtube, and it led to a successful gig shortly after it’s release, in which I am grateful for I personally believe it didn’t reach the audience it deserved. A lot of lyrics on that single have gone over people’s heads. People can relate and make sense of lyrics according to their personal situations, that’s the beauty of music.

How did you manage to have a gig within a couple of months of your first release, and how did it make you feel?

Shortly after releasing “Beggin’ it”, my Instagram DM’s had numerous producers and other unsigned artists wanting to collaborate with me. However, what really drew my attention was the requests to perform this particular single at local London gigs.

My initial instinct was; “these requests feel dodgy”. But I kept getting multiple messages regarding different event dates, and venues all asking me to perform the single “Beggin’ it” which had only been released over a month ago! At some point, it started feeling real so I told my friends. They didn’t trust it either and so I wrote it off, thinking its probably people trying to wind me up or even worse, set me up! It sounded too good to be true.

So weeks went by and I started receiving e-mails rather then dm’s offering available gig venues and dates. Eventually, I replied to two particular e-mails, and in the end, I decided to go with the one that seemed more genuine and professional.

It was a concert consisting of many other artists, so they only initially expected me to sell 25 tickets. lol, I ended up selling 200 tickets. In fact, I ran an Instagram tally and the reserved number of ticket requests were much higher. Though due to the corona pandemic, a lot of people pulled out from purchasing tickets last minute.

In addition to that, I also have a circle of friends that also do music, so we selected a few unreleased songs we had featured with each other. Not only did I perform “Beggin’ it” but it also meant my friends got the opportunity to showcase their talent as well.

You cannot compare Henri Matisse and Pablo Picasso, straight facts. Each had their own style. Music is also a form of art, and as I mentioned before art can neither be perfect nor compared, it can only be appreciated for what it is. So long as you’re focusing on your own journey, you’re on the right track. I would never compare my music, nor try to be like anyone else. That simply takes away the art of it and my reason for making music in the first place. It’s all subjective to preference.

STRFKR- Future Past Life Review
Frankly Austyn talks about his craft, sense of style and more